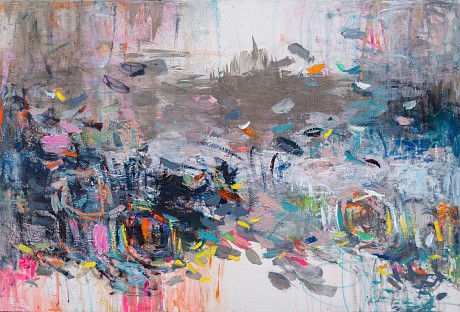 Amy Donaldson’s strong sense of color and depth of feeling for space and light is achieved by her fusion of crushed, powdered, natural pigments with oil paint that are applied in a freely expressive manner. Using tools other than traditional brushes she attacks the surface of the canvas in a direct approach that is additive and subtractive—a process one may associate with sculpture as much as with painting. She lays down luscious, pliant marks across the surface, scrapes areas of the composition back, then vigorously adds and scrapes again to achieve her goal. Her range of expression comprises the appearance of timeworn erosion of an aging city to the seemingly endless atmospheric depth cloaking a horizon in a hazy light. Sometimes elements of graffiti appear, their looping letters cutting through the roughly layered surface like traces of humanity on aging city walls or an ecstatic cry to the heavens splitting the sky.

Donaldson has exhibited internationally from London to New York, Chicago and California. A 2016 solo show in Paris, Brussels Art Fair, Art Basel Miami, Atlanta’s National Juried Exhibitions and Illinois State Museum. Her work has appeared in Chicago PD, Luxe Magazine, Nuevo Estilo Magazine, Madrid, Spain and many other publications. Her works are in numerous private and public collections.  She currently lives and works in California.