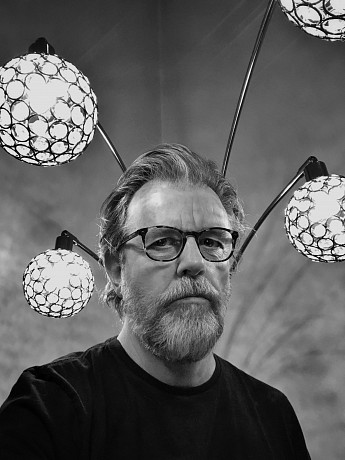 Steve Moors is a British/American artist based in New York who creates digital hand rendered drawings which are subsequently printed as unique works of art. The motivation for his work is essentially driven by his fascination with the incongruities and conflicting self-deceptions created by the struggle between our primal and present modern selves. This confluence of evolutionary insistence maps the ways in which we navigate our personal window of time. Something we can all relate to.

Through his work he strives to bring together these multifaceted aspects of life experience as ingredients for a fresh and exploratory world view. It is an attempt to present these phenomena in a visual language that is focused enough to address the issue at hand, yet broad enough to transfer coherent concepts without being colloquially or culturally exclusive. In essence, he sees his drawings as contemporary visual sutras, to be pondered, absorbed, and considered. The various facets of an image are in essence seeds which are planted upon viewing, then integrates with the viewers sense of self, stimulating and provoking a broader mindset.

Though he works digitally, his art has a natural organic appearance and he brings the same sensibility, drive and discipline from when he had my brick and mortar studio, as this quality resides in his mind, not in the medium and/or location. He says that for better or worse, wherever he gos, his head goes too. Working digitally also allows for massive scale/size variations otherwise not accessible, and becomes a major advantage when his artwork is being considered for integration into a physical spaces.

Not for Nothing / 1991 David Hemper Gallery. London, UK. Solo show.

For the Love of Francis B / 1987 Daniel Shrödinger Gallery. London, UK. Solo show.