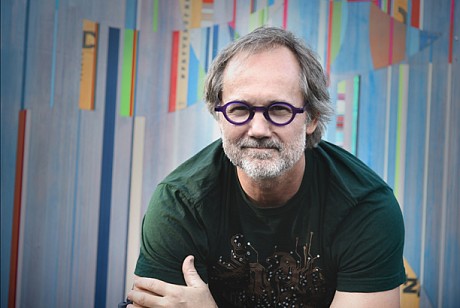 Woody Patterson discovered art at an early age and became familiar with many mediums and techniques. Later, his interest in visual arts resurfaced while attending college where he received a formal art education. There he combined fine art and business interests with an emphasis on visual communication as preparation for a career in graphic design and advertising. After college he lived in Atlanta, Georgia and embarked on a profession as an art director. Eventually, he returned to Alabama and, in 2012, began to dedicate all of his efforts to fine art.

An abandoned skating rink is where Woody’s art began its metamorphosis. It is where, he believes, he discovered his true potential as an artist. A space, once filled with life and youth had, years before, transformed into a spiritless, stagnant warehouse filled with circuit boards, electronic wire, radios, computers and everything in between. In 2013 he decided to take a year off exhibiting dedicate his time to evaluating his efforts in an attempt to expand his relevance. A mere two weeks into this pivotal year off, Woody received a call to lend a hand closing up a space filled with the remnants of a long gone out of business electronics company. In the process of organizing he came to the realization that the materials and objects he was sorting through were, in fact, artifacts, and that technology is as temporary, as ephemeral as any artistic idea. At this point he set about collecting the unconventional materials and began exploring ways in which he could wed them with his art and make them more relevant and current. At the time, he didn’t realize the huge impact the bin-bound refuse would have on his creative process.

As he engaged with these technology-related items, it was evident that the items required a different approach. The nature of the materials forced him to adjust his process from that of a conventional painter to that of an innovator, designer and problem-solver. This challenge was familiar from his previous career in advertising and graphic design, where every client required a fresh approach. In time, by looking inward and embracing what his life experiences and natural talents had to offer, he engineered his own method of creation. Patterson believes that formulating a process that takes advantage of so many of his personal talents and abilities is the reason his work has become unique and allows his creativity to bring his work more truth to self.

Individualized curriculum with emphasis in printmaking and graphic design